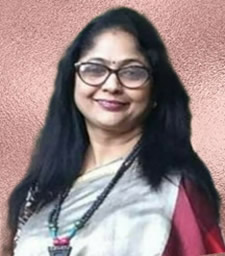 Mahananda Chandargi is a vibrant and ambitious person with humbleness and simplicity in approach. She is always believing in the motto of Inner Wheel Friendship and Service.

She born on 26th March at Kolhapur as an elder daughter of President Awardee ACP Late Y.B. Patil and late Smt.Kasturi. Mahananda exemplifies generosity, intellectuality, leadership and full of life from her parents

She is an achiever since her childhood. Leadership qualities right from school days, helped her to out sign in whatever she did. She was a good athletic as well as excellent in her academics. She graduated in M.Sc. Statistics and PGDCA from Karnataka University Dharwad.

She has keen interest in education. Started her own Mathematics tutorials for the children of Indian defence soldiers at Vijayapur. She has also conducted many seminars for rural students of 10th class. She has written many guidelines books on mathematics. Basic Algebra, Essential and Basic Trigonometry, Formula books, Mathematics examination tips for 10th class, Career guidance after 10th, know the basic maths and many more.

Mahananda joined Inner wheel club of Bijapur in 2001 and served sincerely in all social projects. Her passion to serve the mankind, she became the club President in 2004. She served the club in all the capacities with the great dedication and commitment. In club level she did lot of work and got recognition in District. She adjudged as outstanding Club President and Best club ISO of Dist.317. She was the chairman of District Rally in 2006, which was hosted by IWC Bijapur. During her club literacy coordinator period, she had done a very excellent job. She had proved her club capacity on making First Happy school of District 317 which was inaugurated by honourable PIIW President Dr.Bina Vyas.She was appointed as District Zonal Literacy Coordinator for the year 2015-2018. She had encouraged the clubs for literacy projects under her zone and 15 happy schools were sponsored in her tenure. She had conducted many educational projects for her club. Maths Garden at Govt.School campus, summer camp for underprivileged children, Libraries, Smart classes, Science laboratories, Toilets and Water facilities at Govt.Schools. Lead the club in fund raising programs and major projects like free camp for deaf and dumb children and provided 100 Hearing Aid machines to under privileged children, cost of the project was Rs.15 lakhs. Conducted Free Prosthetic Limb camp. In 3 days camp, donated 28 artificial limbs, 10 calipers and 4 wheel chairs for the needy.

Apart from Inner Wheel, she served the society in many fields.

She is blessed with a happy family, husband Dr.Shivaprabhu Chandargi, Physician, Senior Consultant of DNB, Medicine and has running his own hospital. Happily blessed with two loving sons Dr.Chandan, Anaesthetist, daughter in law Dr.Kshama , Gynaecologist and younger son Nehal, Mechanical Engineer, pursuing his post-graduation in Canada

Her hobbies are travelling, Gardening and cooking. She travelled many beautiful places of India and also visited many countries of Europe, Australia, New Zealand and UAE.