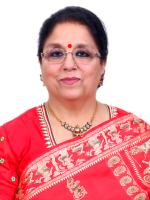 A doctor whose life’s mission is to heal the sick and ailing,to give Hope where all seems hopeless ,to bring new life into the world and happiness to many, describes in a few short sentences, our Incoming Association.

Her early years were spent in Jammu & Kashmir where her father who was in the Armed forces was stationed .She did her Senior Cambridge from Carmel Convent Chandigarh .Even as a young girl her deep desire was to care for the sick . Her inspiration was Dr Mary Poonen Lukose ,from Kerala who was an Indian gynaecologist and obstetrician and the first female Surgeon General in India .Dr Surjit went on to do her MBBS from Jammu & Kashmir, followed by her post-graduation in Anesthesia, Obstetrics & Gynaecology. She had found her calling – Care of women and girls

She worked in the Punjab Civil Medical services for 25 years, offering her dedicated services to the state at the grass root level.
The Multi Speciality Hospital in Kapurthala ,stands testimony to the dedication of Dr Surjit and her family, who are also doctors , to serve the

community with love and compassion for the past 28 years.

Her IW journey began in 1999 when she became the Charter member of the newly formed Inner Wheel Club of Kapurthala. She was declared the “Best Member” in 2001-2002

She took over as President of her club in 2005. Bubbling with energy and enthusiasm she took part in all club projects and served with dedication on all the executive posts. She was declared the “Best President “and her club also received the “Best Club “award during her President ship. Her work in Breast Feeding promotion was awarded the “Best Project “in the District. The club received a cash prize on Rain Water Harvesting at the National level along with “Best Medical Project” of the year.

She entered the District in 2006 and served at all the district posts with distinction. As District Chairman in 2011-2012, she increased membership by 100. She organized Zonal Meets on Membership Development and Image Building, District Past Presidents Meet , and PDC Meet during her tenure.. She was the first to compile, publish and print a District Souvenir in her District. The hallmark of her Chairmanship was the frequent medical camps held and the follow up , and till today she provides free medical help to the underprivileged .

“Her mantra is Health for all”

She was also the Chairman of the very successful Multi District Rally held at Amritsar.

She was elected National Editor in 2018-2019 and won many accolades from International IW Editor for her excellent reporting and coverage of all IW projects and events in India. She compiled,published ,printed , and released “Empower & Evolve “ a book highlighting the projects done by the Chairmen of all the 27 Inner Wheel Districts in India ,which received great acclaim
She has attended the National PDC Meet, several Triennial Conferences, South Asia Rallies, and IIW Conventions. She was a scribe at the Triennial Conference 2019 at Pune and the Co-Convenor of the North Zone Meet held at Jammu in 2019 as well .

A busy doctor, a dedicated member of Inner Wheel, she is an active Rotarian too. She was the charter member of Rotary Club Kapurthala Elite and served as Club President. She has also served as Assistant Governor, District Secretary and District Co-Editor of RI District 3070. She is a Major Donor.

She has also worked extensively for the Eradication of Polio.

She has been holding free camps for menopausal women, as well as frequent thyroid and bone density camps in her hospital for the past 20 years. Adult education in villages and micro financing for village women are issues close to her heart and she is actively involved in working for both.

Dr. Surjit Kaur is happily married to PDG Rtn. Dr. Sarbjeet Singh who is an E.N.T. specialist from P.G.I. Chandigarh. They are blessed with 3 children- 2 sons and a daughter and like the parents they believe in bringing healing and wellness to the sick .All of them are doctors. She is blessed with one grandson – Kabir, who follows the family tradition of helping the underprivileged, even at the very young age of Four

She strongly advocates empowerment of women and deeply concerned about other women related issues. Positive health for women is her major focus. She believes that women must be healthy as a first step towards Empowerment. She believes that Inner Wheel is the vehicle through which our vision of an Empowered Woman can be transformed into reality .If all the Inner Wheel members join hands to support and encourage women , it will build stronger communities. Together we can help women and girls lift themselves and their families out of extreme backwardness and penury, live healthier lives, and reach their full potential. When girls and women are empowered, everyone wins. And, when her potential is unleashed, she is a powerhouse of strength and energy that cannot be crushed.

Dr. Surjit Kaur loves reading, writing short stories, watching musical concerts and theatre plays. The warmth of her friendship and hospitality are a bye word to all at Inner Wheel.