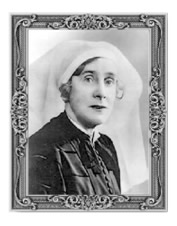 Mrs. Margarette Oliver Golding took the first step to form Inner Wheel in 1932, which today is considered as one of the largest organisations of women in the world to promote true friendship, to encourage the ideals of personal service, to foster International Understanding.

Mrs. Margarette Oliver Golding – The candle that lit the flame of Inner Wheel, was born in the town of Hay-on-Wye and was of Welsh origin. She was a trained nurse and served as such during the first World War.

Paul Harris formed the first Rotary Club in Chicago in the year 1905. Mrs. Margarette Oliver Golding called for a meeting for the purpose of setting up a Club on the Rotary lines on 15th November 1923 at Herriot’s Turkish Baths in Deansgate, Manchester. Jay French writes – “It was a curious first meeting place, held in the cooling room of the baths. ” On being asked much later why such an etra-ordinary “choice of venue” had been made. Mrs. golding admitted bravely that it had been the only room that she could get for nothing. This thriftiness has always been guiding factor of Inner Wheel.

The Margarette Golding Award
This award is presented to an Iner Wheel member or others whom the Club or the District wishes to honour commendable personal service to inner wheel or to the community.

Birth of Inner Wheel in India
The first Club in India was formed at Ahmedabad in 1955. Mrs. Minnie Gamma was the Charter President of Inner Wheel Club of Ahmedabad. Slowly the Inner Wheel movement spread its wings to other cities in India.